Sabancı Foundation carries out many activities and supports a great number of projects across the country over 40 years to contribute to social growth in Turkey. 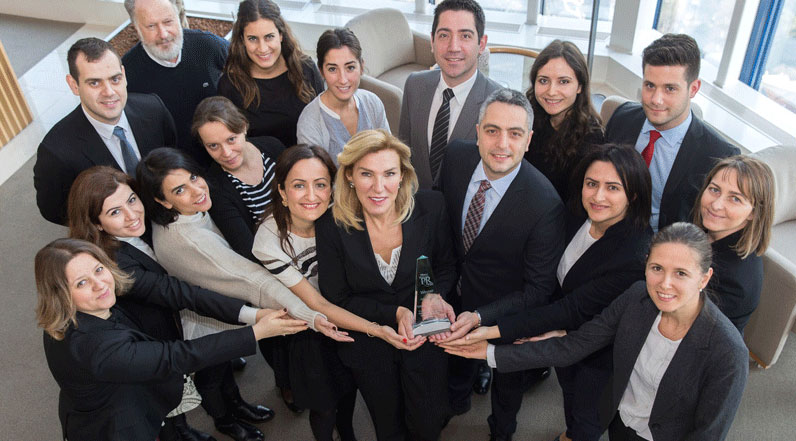 Sabancı Foundation carries out many activities and supports a great number of projects across the country over 40 years to contribute to social growth in Turkey.

All projects supported and activities carried out have the quality of creating solutions to problems and all are done with a sense of quality and excellence.

Shaped with the selfless work of hundreds, these efforts reach and inspire millions. These efforts have been honored with significant awards both in national and international platforms.

With these efforts, not only the Sabancı Foundation, but also Sabancı Foundation chair of the Board of Trustees Güler Sabancı took our country to the stage in the international arena with the awards she won in the fields of philanthropy, leadership and innovation, being the leader of all these projects with her innovative mindset.

The Sabancı Foundation Philanthropy Seminar was granted the award given in the category of Agenda Management in the Golden Compass Awards by the Turkish Public Relations Association (TÜHİD) organized for the 18th time this year.

The Sabancı Foundation was granted the award given in the category of Media Relations in the 17th Golden Compass Awards on May 11th 2018 by the Turkish Public Relations Association (TÜHİD) for its Short Film Competition organized for the second time last year.

TÜHİD has been granting Golden Compass Public Relations Awards since 2001 in order to promote and reward successful public relations activities, and this year hundreds of projects competed in 17 categories and 17 sub-categories. Please click here to learn more about it.

Sabancı Foundation won the “Grand Award” in the category of “Anniversary” in the scope of Platinum PR Awards awarded to the best communications campaigns worldwide and organized by PR News which is the intellectual information access center of the communications and marketing sectors.

Nearly 200 prestigious brands across the globe made it to the finals and the awards of the competition were presented to the winners in a ceremony held in New York.

Sabancı Foundation has been the only brand from Turkey that was presented with the Grand Award this year.

Sabancı Foundation was granted “the Grand Award” in the 14th Golden Compass Awards on May 25th 2014 by the Turkish Public Relations Association (TÜHİD).

124 projects under 20 categories competed in the Golden Compass Awards that is considered the most prestigious award in the field of public relations in Turkey.

With its communications work for its “Changemakers” program that brings into view the great stories of extraordinary people producing solutions to social problems, Sabancı Foundation was awarded “the Grand Award”.

Sabancı Foundation was presented with the “Special Jury Award” in the Golden Compass Awards, organized by the Turkish Public Relations Association (TÜHİD) for the 13th time, on June 3rd 2014 in an international workshop named “We Can End Child Marriage Together: Sharing Lessons From Other Countries” hosted by the Sabancı Foundation in Istanbul. Members of the “Girls Not Brides” platform participated in the workshop as well.

A total of 113 projects in 23 categories were submitted for the Golden Compass Public Relations Awards, presented by TÜHİD since 2001 to reward and encourage successful public relations work

Sabancı Foundationwas awarded the International Gold Star Award for Quality granted to institutions that are leaders in their sector by Business Initiative Directions (BID), an expert institution in sustainable growth and spread of quality culture. The award was given to Zerrin Koyunsağan, the General Manager of the Sabancı Foundation, by Jose E. Prieto, the president of BID, in a ceremony held in the World Quality Commitment Convention in Paris on October 27th 2013.

BID expressed in a statement that the award winner was determined with the election carried out by the International Selection Committee, composed of various sector representatives from 90 countries. It also added that the Sabancı Foundation gained the attribute of leadership in the sector and the society with its management mentality constantly improved with the principle of quality in the center.

Sabancı Foundation Chairman of the Board of Trustees Güler Sabancı was honored with the David Rockefeller Bridging Leadership Award, which is awarded to leaders who strive for social development. Named after the leading businessman and philanthropist of America, David Rockefeller and given to leaders who carry out pioneering and effective work in philanthropy, this award was presented to Güler Sabancı in a ceremony held in Geneva, Switzerland on October 8th 2013.

On September 25th 2012, the Sabancı Foundation Chair of the Board of Trustees Güler Sabancı was presented with the Clinton Global Citizen Award by the Clinton Global Initiative established by the former U.S. President Bill Clinton. Güler Sabancı received the award in the “Leadership in Corporate Sector” category for her work in promoting the human rights of women and girls and in supporting the social, cultural and economic development of Turkey.

Awarded to winners since 2007 by the Clinton Global Initiative, this award was also previously presented to Warren Buffet’s son and daughter in law Jennifer Buffet-Peter Buffet, former chairman of the Coca Cola Company Neville Isdell, chairman of Avon’s board of directors Andrea Jung and Paul Bakkeri, the CEO of TNT.

Sabancı Foundation Chair of the Board of Trustees Güler Sabancı was awarded the “Raymond Georis Prize” by the jury chaired by Javier Solana, the Secretary-General of the Council of the European Union. With this prize, The Sabancı Foundation became the first Turkish foundation to be included in the winners list of Europe’s most important philanthropy award.

With the participation of native and foreign guests, a reception was hosted at the Sakıp Sabancı Museum in the honor of Güler Sabancı, the Sabancı Foundation Chair of the Board of Trustees, receiving the Raymond Georis Prize for Innovative Philanthropy on June 5th 2009.